From the 17th to the 29th of November 2018, governments met in Sharm El Sheik, Egypt, to negotiate issues related to the protection and sustainable use of biodiversity in the framework of the United Nations Convention on Biological Diversity (CBD). “Marine and Coastal Biodiversity” was on the agenda, which is why I participated in the negotiations as a representative of the University of Vienna and in my position as a Principal Investigator of MARIPOLDATA. In the following, I will give an account of the negotiations and shed light on the tensions that emerged between governments and what these tensions tell us about the place of science in international marine politics. 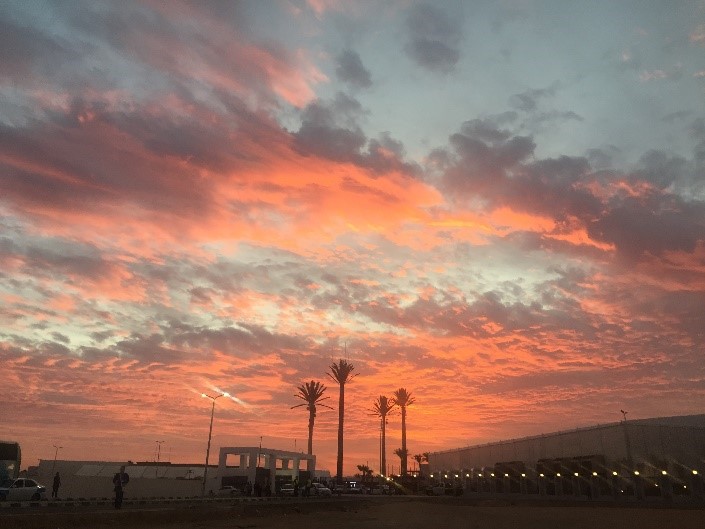 The venue from outside

The 14th Conference of the Parties of the CBD was held at the International Congress Center (SHICC) of Sharm El Sheik, close to a seemingly provisional bus terminal, where buses regularly shuttled between the conference hotels, mostly located at the seaside, and the conference venue, which was rather remote. Arriving from the Airport in the middle of the night, one could sense that Egypt was more than proud to host the 14th COP. The airport and the highways were covered by large posters welcoming delegates from all over the world, national delegates, representatives of NGOs, local and indigenous communities, business, academia and research and other UN agencies and bodies. 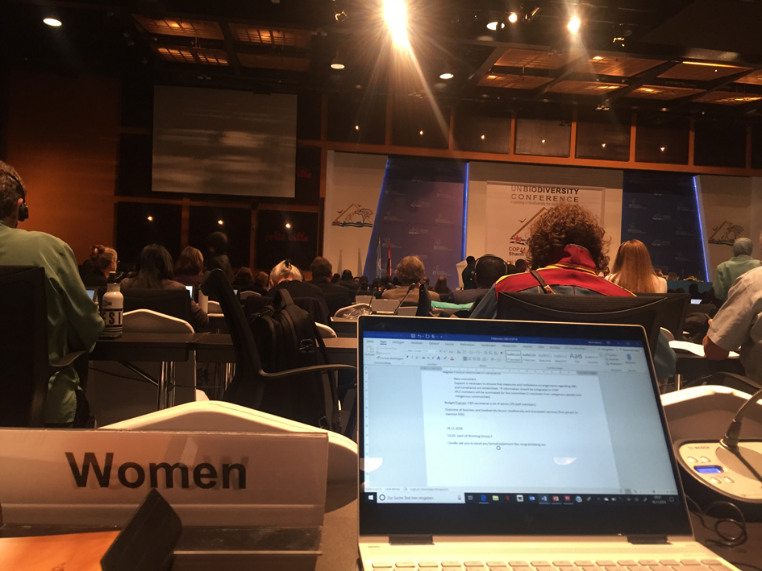 Place, from where I did many observations

COP 14 belongs to the so-called “mega-event”, where high diplomacy is performed and where, for the period of two weeks, the global biodiversity community from A like African Development Bank Group to Z like Zoological Society of London met.148 governments and 3828 individuals participated in the negotiations. The size of the national delegations varied significantly. While the German delegation, for example, comprised 36 delegates, Brazil sent 66 representatives and Bolivia 4. Austria sent 25 delegates, a rather large number, which can be explained by the fact that Austria had the EU Presidency and was in charge of organising the EU position and speaking on behalf of its member states. Because of security issues, some governments did not send any representative; other governments restricted travelling of their delegates to Sharm El Sheik and Kairo. 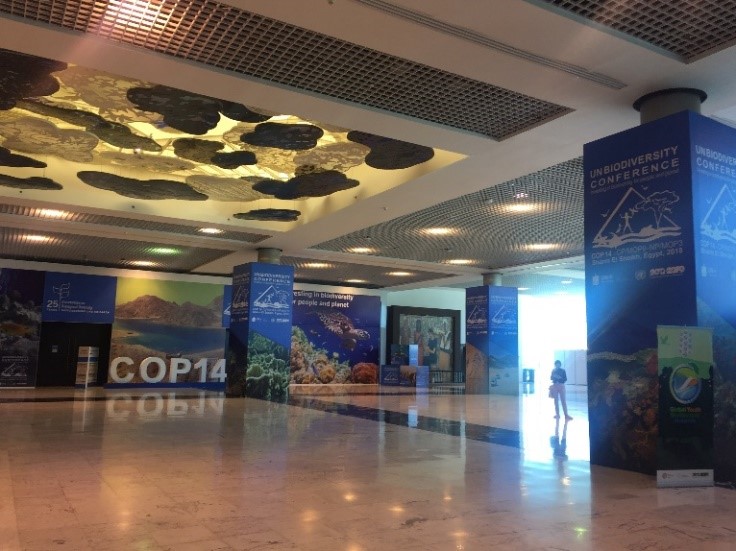 The venue from inside

Egypt, the host of COP 14, had a very keen interest in marine issues. The longstanding representative of Egypt to CBD COPs, Moustafa Fouda, Minister Advisor on Biodiversity, is himself a marine biologist. Marine and coastal biodiversity of the red sea was present at the venue through pictures and advertisements covering the walls and rooms of the Congress Centre, which nearly gave the impression that the whole COP was actually about marine issues. Several side events addressed marine biodiversity and were used by government representatives and representatives of NGOs and academia, to discuss progress made in implementing Marin Protected Areas (MPAs), marine biodiversity monitoring programmes, technologies and practices. On Saturday, November 23rd, during the break from negotiations, a “Sustainable Ocean Day” was organised by the CBD Secretariat, in which surprisingly most of the national delegates, which took part in negotiations on marine issues, participated. Including myself.

Negotiations on “Marine and Coastal Biodiversity” 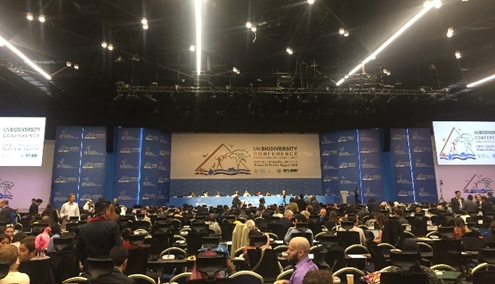 The negotiations on item 25 “Marine and Coastal biodiversity” only stared on day 3 of the COP namely on November 20th. The chair opened the floor for interventions on the draft text, including comments on the different options proposed. The interventions were never-ending and marine biodiversity turned very quickly into a controversial issue, which the partly opposing view of some delegations showed. Tensions emerged regarding the symbolic constraint on national sovereignty and jurisdiction, potential effects on conflicts related to disputed marine areas, and the recognition of the United Nation Convention on the Law of the Sea (UNCLOS) and its on-going efforts to establish a new legally binding instrument for marine biodiversity in areas beyond national jurisdiction. Governments, who had to call their capitals for further advice, constantly interrupted negotiations.

Why is marine biodiversity so controversial?

In 2008, CBD COP 9 decided to address the protection and sustainable use of marine biodiversity through a “purely scientific process”, particularly to avoid conflicts related to the United Nation Convention on the Law of the Sea (UNCLOS), which is not recognized by all member governments of the CBD (e.g. Turkey, Venezuela, and Columbia). The idea was to tackle the protection of marine biodiversity beyond national jurisdiction through regional workshops, where scientists could make the first move by synthesising marine biodiversity data for identifying ecologically or biologically significant marine areas (EBSAs) in need of protection in open-ocean waters and deep-sea habitats (COP IX/20). The EBSA descriptions rely on different types of data and the scientific input of experts nominated by governments and relevant organisations. In a final step, the draft descriptions as produced by the experts, including geo-locations and scientific references, are compiled into negotiation text and then adopted by governments before being entered into a digital repository. Since 2008, more than 300 EBSA were described and approved by governments. Some of them are located within national jurisdiction, others in areas beyond national jurisdiction, and some in territories of two states and in international waters and so on. However, once entered into the repository, how can the descriptions be changed and new ones added if they belong to an area already covered by a workshop?

In other words, borders were the Pudels Kern, which is why negotiations “came close to collapsing” (ENB 2018, p. 2) . Therefore, when the chair opened the floor for intervention, almost 40 governments asked for it and made rather detailed interventions on the proposed text. They continued to the break and had to stop, because of plenary. They continued the next day when the chair had to conclude that a contact group had to be established to balance the diverging views of the different delegations. The contact group met 5 times and negotiations often progressed until midnight. The most difficult part concerned the modalities for changing EBSAs located in national waters of one state. While China, Korea, Singapore, Turkey and Japan, were in favour of establishing an intergovernmental process, the EU (mostly because of the UK and Greece), New Zealand, Argentina, Columbia and Brazil opted for a national process. Columbia in line with other governments such as Brazil and Argentina underlined the superiority of national sovereignty over national waters.

An interesting question remains why China, Korea and Japan formed –at least until the last day- a coalition to support the idea of an intergovernmental process. One could speculate that an intergovernmental process enables governments to control the behaviour over others, particularly regarding disputed marine areas. If the EBSAs already agreed on are changed through a purely national process with no reporting obligations, the descriptions might cover the territory, which is disputed. While the “purely scientific process” and the EBSA descriptions do not imply “the expression of any opinion whatsoever […] concerning the legal status of any country, territory, city or area or of its authorities, or concerning the delimitation of its frontiers or boundaries” governments were concerned about potential effects of prejudicing through scientific descriptions.

The effects of new science and data (infrastructures)

A continuous process for monitoring and modifying EBSAs is crucial, for maintaining the scientific credibility of the descriptions by updating them with scientific insights and new marine biodiversity data, rapidly developing inter alia because new technologies for collecting and analysing data are applied to ever broader

and deeper areas of the oceans to explore its geography and biological diversity. New detection methods, sampling regimes, big data infrastructures, digitisation of historical data and attempts to combine remote sensing and genetics have created new approaches to safeguard marine biodiversity, enhance national biosecurity and track biodiversity monitoring and modelling into the future. Big environmental data sets and automated analysis shape expectation towards new forms of governing the oceans, which is exemplified by the debate over EBSAs and the modalities for modifying their borders. While the adoption of EBSAs over the past 10 years was rather uncontroversial, the question on how to modify them pushed diplomacy to its margins.

In the end, governments adopted the new EBSA descriptions without any controversy and decided to postpone further debate on how to modify EBSAS and add new ones to the next meeting of the Subsidiary Body on Scientific, Technical and Technological Advice (SBSTTA) of the CBD (see brackets and unresolved text in CBD COP 14 Decision 14/9) . It remains to be seen if an agreement can be reached at the CBD SBSTTA or at next COP, which will take place in China in 2020.