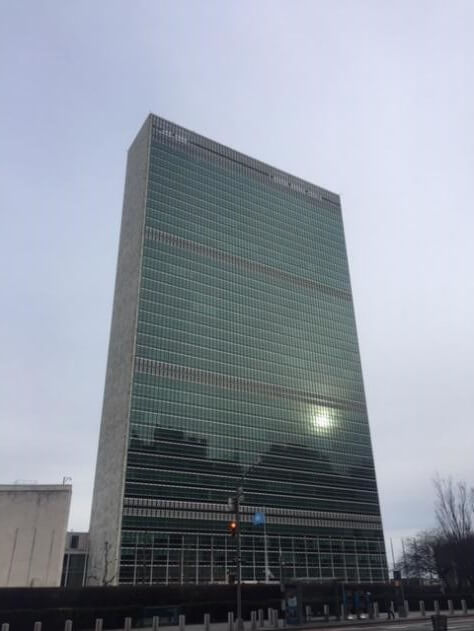 From March 25th to April 5th 2019 the second round of negotiations on an international legally binding instrument for the conservation and sustainable use of marine biological diversity of areas beyond national jurisdiction (BBNJ) is held in the UN Headquarters in New York. The new instrument -if governments agree- will be established under the United Nations Convention on the Law of the Sea (UNCLOS) and addresses gaps in current international law related to the governance of marine biodiversity in international waters. A third and fourth round of negotiations taking place in August 2019 and spring 2020 are expected to lay the ground for consensus on a new instrument shaping the conditions for how we study and use marine biodiversity in the future.

Fairness in exploring and exploiting the oceans?

The questions, which governments address, are wide-ranging and the proposed solutions carry the potential to transform how we study and govern our oceans in the future. How can the interests of different governments on the use of marine biodiversity be balanced with the need to protect and conserve marine biodiversity for future generations? This week, governments addressed the issues of Marine Genetic Resources (MGR) and Areas-based management tools (ABMT) and Marine Protected Areas (MPAs) based on the President’s aid to negotiations, which was developed to facilitate the negotiations and give an overview on all options that had been proposed by governments during the Preparatory Committee and the first session of negotiations, which took place in New York in September 2018.

What are the criteria for identifying areas in need of protection? Who can apply these criteria and designate new Marine Protected Areas (MPAs)? If designated, who has the authority to manage and monitor these areas and do certain governments have more responsibilities in doing so than others? Should the technology gap between governments from the global north and the global south and the different capabilities of states to explore and exploit biodiversity beyond national jurisdiction be addressed, and if yes how? Does a new treaty imply changes to existing legal frameworks of the law of the sea? As government do not seem to want any changes to the existing framework, what is it then that a new treaty will actually do?

The debate about marine genetic resources deals with the possibility to use a variety of species living in the deep sea for commercial purposes by decoding and analyzing their genetic information. Although knowledge about marine genetic resources and about the potential fields of application is largely lacking up to date, the sheer possibility that genetic information of species found outside of national jurisdictions could become commercially exploited in the future makes this debate a fundamental one. In the negotiations, it quickly became clear that a substantial divide between developing countries and a number of developed countries exists. It had been agreed that some sort of benefit sharing should take place in relation to marine genetic resources and the future commercial use of them but the scope, the process and the rules under which the benefits would be shared caused disagreement.

Is the genetic information of deep sea species a common heritage of mankind? 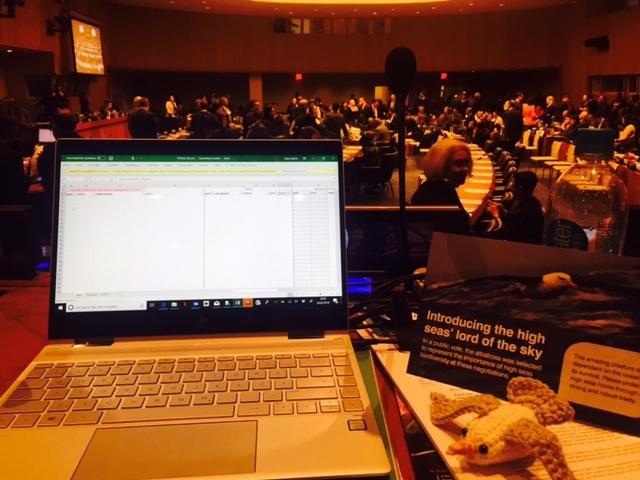 Place where we were sitting with view on national representatives

Several countries such as the Pacific Small Island Developing States (PSIDS) and Brazil on behalf of the Latin American and likeminded countries favour that marine genetic resources should be treated as “common heritage of mankind”. This principle of “the common heritage of mankind” underpins the current international seabed regime, meaning that all resources found on the seabed in areas beyond national jurisdiction belong to all humans and future generations equally. They are “common goods”. In consequence, if a company wishes to exploit natural resources in the seabed it is obliged to share the benefits. The International Seabed Authority (ISA) is mandated to make sure that all benefits arising from the exploitation of minerals lying on the seabed in areas beyond national jurisdiction are fairly distributed. Some developed countries such as the USA however, strictly reject the application of this principle to marine genetic resources and prefer a process in which companies or states share in a voluntary way and only are supposed to share non-monetary benefits. Non-monetary benefits could include for example genetic repositories and other scientific capacities, including the transfer of marine technology. It was proposed to establish an open access data sharing mechanism in form of a one-stop clearing house, which contains not only genetic repositories but also information about date and place of excursion cruises.

From a scientific perspective it was noted that the sharing of data, samples and repositories exists as common practice and that the potential treaty should thus go beyond the existing practice, enabling more international scientific cooperation without placing complicated regulation on scientific research. Following these considerations, it was discussed how such a clearinghouse mechanism should be designed.

After all parties presented their opinion on the topic of MGRs, the president moved the negotiation to the second item of the President’s aid, namely the topic of Area Based Management Tools such as Marine Protected Areas. In this item, it was crucial to determine who could establish a marine protected area and based on which criteria. The room was divided on this issue. Countries such as the US and China prefer to create a process in which only states can propose marine protected areas and subsequently have to decide upon the establishment unanimously. Most of the parties such as the EU however, argue that a mechanism is necessary for cases when consensus cannot be reached and the decision-making body would effectively be blocked. Furthermore, some states proposed to open the process of identification of areas that qualify for a MPA to scientific bodies or other non-state parties. Disagreement also existed on the question whether MPAs should be management and chosen according to the precautionary principle or according to the precautionary approach, which would include weaker rules.

On Friday, the floor was opened to give a first impression into the different positions concerning the conduction of environmental impact assessments (EIA). Again, states differed on the view whether such a process should be led by an independent scientific body or by the states themselves.

The first week of negotiations was marked by a very positive atmosphere and the willingness of governments to make progress was very visible through several interventions made. The chair opened the negotiations using the metaphor of a “canoe”, in which all governments are sitting and where everybody has to engage equally to make the canoe move. The metaphor was picked up by some governments and NGOs as well as representatives of scientific communities that signaled their commitment to the process and their willingness to advice, where necessary. The number of observers and representatives of Intergovernmental Organizations (IGOs) and NGOs, was higher than at the first session and it seems that interest in the process has generally increased.

Each day, two to three side events were organized by IGOs, NGOs and scientific communities to shed light on the most pressing issues and for the purpose of sharing expertise and experiences across different stakeholder groups. In one side event, organized by the International Oceanographic Commission (IOC) of UNESCO, scientists presented ongoing efforts to establish global databases for sharing marine biodiversity data among scientists. The side event was very well attended, inter alia by representatives of the EU and the US, who asked questions about the practicalities to establish some kind of repository under the new instrument through which information on scientific activities on the oceans could be shared and capacity building for developing countries be supported.

Negotiations will continue until the 5th of April. Ideally, a zero draft for the third session in August will be ready by then. However, this depends on how the current discrepancies between the different interest groups are resolved and what language will be found to bridge contradictory red lines between government positions.

This article has been written by Arne Langlet and Alice Vadrot