MARIPOLDATA has now published a new literature database covering scientific publications on the ongoing intergovernmental negotiations for the conservation and sustainable use of marine biodiversity of areas beyond national jurisdiction (BBNJ). Providing a continuously updated overview of scientific BBNJ governance publications, the database can serve as a point of information for both researchers interested in the study of BBNJ and governmental and non-governmental actors involved in the BBNJ negotiations. We hope that the database encourages inter- and transdisciplinary debate within and beyond the scientific community and serves to inform the ongoing BBNJ negotiations throughout the intersessional period.

Background on the BBNJ negotiations

Negotiations on a new legally binding instrument for the conservation and sustainable use of marine biodiversity of areas beyond national jurisdiction (BBNJ) are ongoing. After pre-negotiations in form of Ad-Hoc Open-ended Informal Working Group and Preparatory Committee Meetings, four intergovernmental conferences were planned to finalise a new agreement. As the last session, planned for Spring 2020, has been postponed due to the Covid-19 pandemic, formal negotiations have paused and discussions continue as informal exchanges on online platforms[1]. There is general agreement that the new instrument should be based on science, among other forms of knowledge, to inform policy-making and meet societal goals.

Our database is a comprehensive collection of peer-reviewed scientific literature, published in English language on the BBNJ negotiations. Based on the sample and methodology of the systematic literature review “The Voice of Science on marine biodiversity negotiations” (Tessnow-von Wysocki and Vadrot 2020)  published in Frontiers in Marine Science, the database incorporates articles on the topic from 2004 until 2021 and will be continuously updated.

The database provides an overview of all academic literature published on or in relation to the BBNJ treaty (negotiations), by authors from diverse scientific disciplines and regions. We facilitate navigation through the publications with filters for topics, years and keywords and provide abstracts, which serves users to quickly grasp the topics and contents of individual articles. A statistics section shows the distribution of the publications by topic, year, region, and source. Additionally, we provide access to official United Nations global assessments and reports, as well as to the draft texts of the BBNJ agreement.

We designed this tool for both researchers interested in the BBNJ process and policy-makers, non-governmental actors, and other stakeholders that wish to keep up-to-date with the latest scientific publications on several aspects of the BBNJ process. As the BBNJ negotiations have been put on hold due to the Covid-19 pandemic, we hope that the database will constitute an important pillar during the intersessional period by making existing research more visible and bridging the gap between science and policy until the next intergovernmental conference takes place.

To get to the literature database click on this picture: 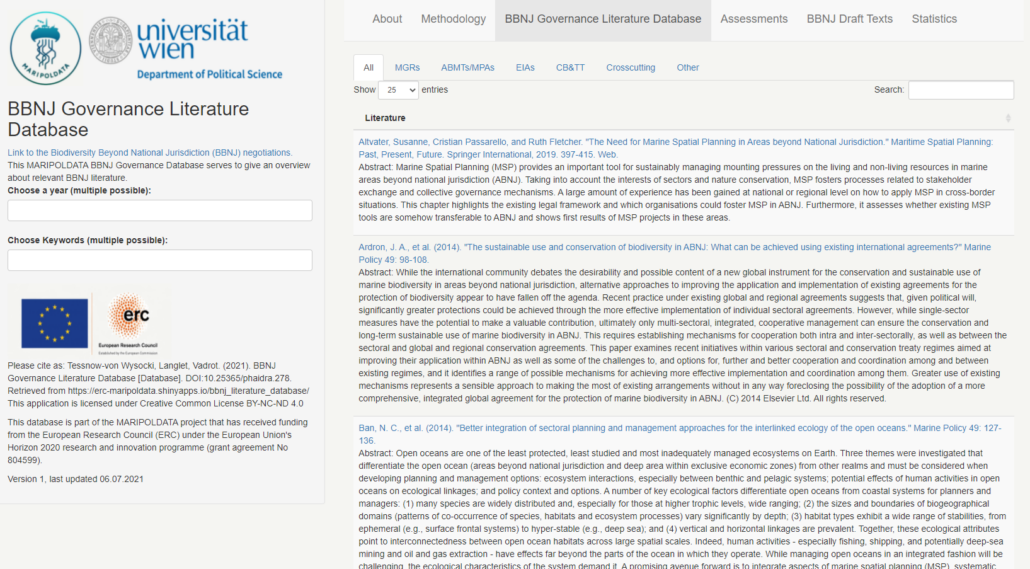 https://www.maripoldata.eu/wp-content/uploads/2019/02/maripoldata_farbe_alpha-e1550830401313.png 0 0 Ina Tessnow-von Wysocki https://www.maripoldata.eu/wp-content/uploads/2019/02/maripoldata_farbe_alpha-e1550830401313.png Ina Tessnow-von Wysocki2021-07-29 14:53:402021-08-04 08:22:33What do we know about BBNJ? New MARIPOLDATA database of Scientific Literature on the ongoing marine biodiversity negotiations
Turning towards the Ocean: Launching a Decade of Ocean Science (Marine) Territories? Conventional and dynamic ABMTs, and the contribution...
Scroll to top