On June 1st, the United Nations Decade of Ocean Science for Sustainable Development (2021-2030) has been officially launched with the First Conference of the Ocean Decade by the German Government[1]. The MARIPOLDATA team presented their work at the Early Career Ocean Professional (ECOP) Days that followed the launch and offered a space for ECOPs to engage, present their work, and form networks.

The United Nations Decade of Ocean Science for Sustainable Development was proclaimed in 2017, as a response to the decline of ocean health and the recognition of the importance of the ocean for humanity and planet Earth[2] (Ryabinin et al., 2019). The Intergovernmental Oceanographic Commission (IOC) of UNESCO is overseeing the international cooperation and design of the Decade to “deliver the ocean we need for the future we want”. Several societal needs have been identified which the Decade aims to achieve by 2030: A Clean Ocean, A Healthy and Resilient Ocean, A Productive Ocean, A Predicted Ocean, A Safe Ocean, An Accessible Ocean as well as An Inspiring and Engaging Ocean[3]. One important aspect is the coordination and integration of already existing data and ocean science into decision-making. Sharing existing knowledge equitably with coastal communities that are most affected by the changes of the ocean and introducing more inclusive approaches of designing and conducting marine scientific research will be important to restore ocean health, as well as to use the ocean’s resources sustainably. Through the Decade, United Nations Member States will be enabled to build scientific and institutional capacity to meet the United Nations Sustainable Development Goal (SDG) 14 to conserve and sustainably manage ocean and marine resources by 2030. 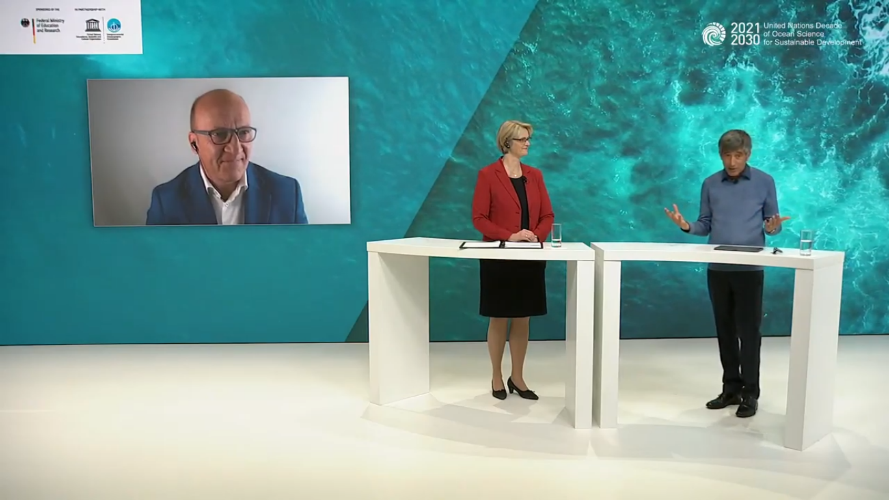 The First Conference of the Decade was attended by over 3,000 participants, high-level politicians, representatives from non-governmental organisations, business and civil society from around the world, who gathered in a virtual format to engage on the most pressing issues and ways forward to protect and sustainably use the ocean and design marine scientific research in the years to come. The conference was characterised by the combination of statements and discussions of heads of government and the space for Early Career Ocean Professionals to contribute and portray their work, who are and will continue to shape our future in the generations to come.

An opportunity- but no time to lose

The conference served to start off the Ocean Decade, to recognize the significant anthropogenic threats the ocean and marine ecosystems are facing today and to reflect on the opportunity we have to act now. A high-level opening by Anja Karliczek, German Federal Minister of Education and Research, António Guterres, Secretary-General of the United Nations, and German Chancellor Dr. Angela Merkel emphasised the importance of the UN decade of Ocean Science to achieve the UN Sustainable development Goals (SDGs). 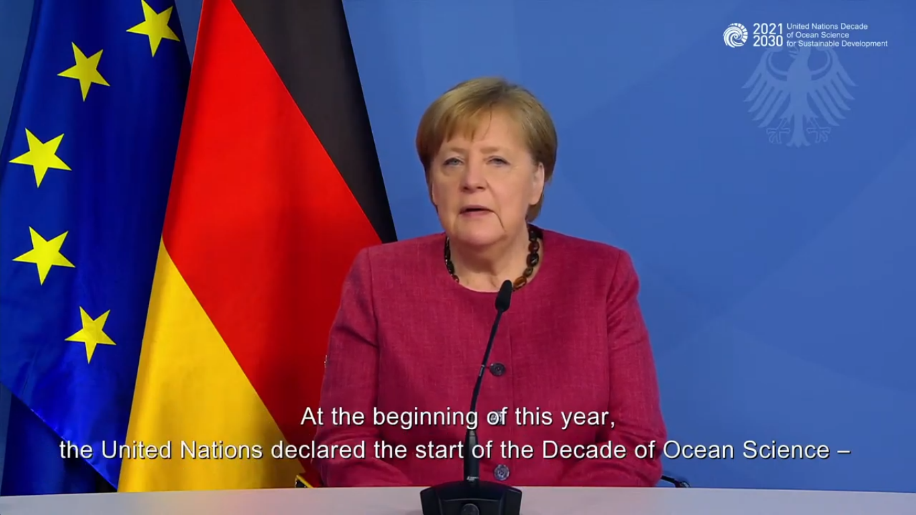 As Audrey Azoulay, Director-General of UNESCO emphasised: After Sepulveda asserted in 1993 that “humans have turned their back to the ocean”, we now need to start a new relationship with the ocean. The Ocean Decade is an opportunity to turn our attention towards the ocean. Prince Albert II of Monaco underlined the link between ocean’s health and human health and Wavel Ramkalawan, the president of Seychelles pointed to the urgency of taking action now, particularly in regards to sea-level rise and expected disappearance of small islands.

Experiences from around the Ocean

The session dived into five projects around the world: Cape Verde, Puerto Rico, the Artic Ocean, Vanuatu, and Canada. 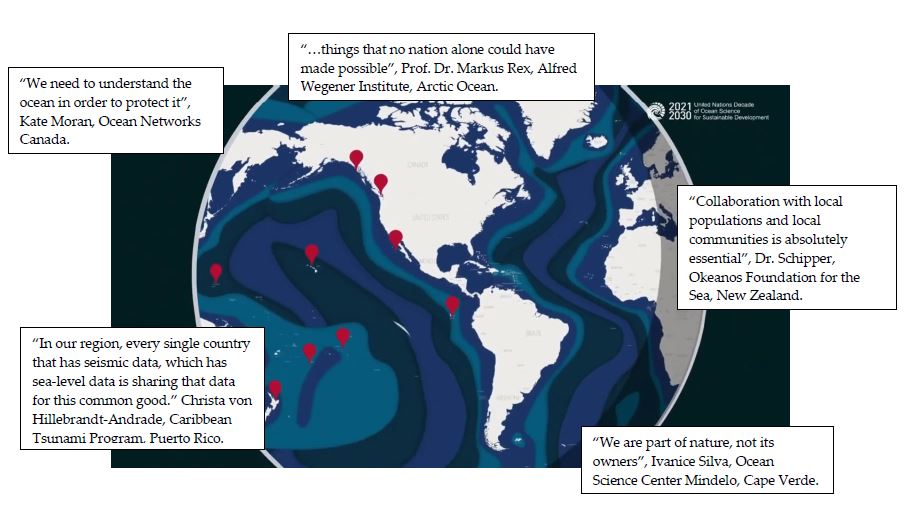 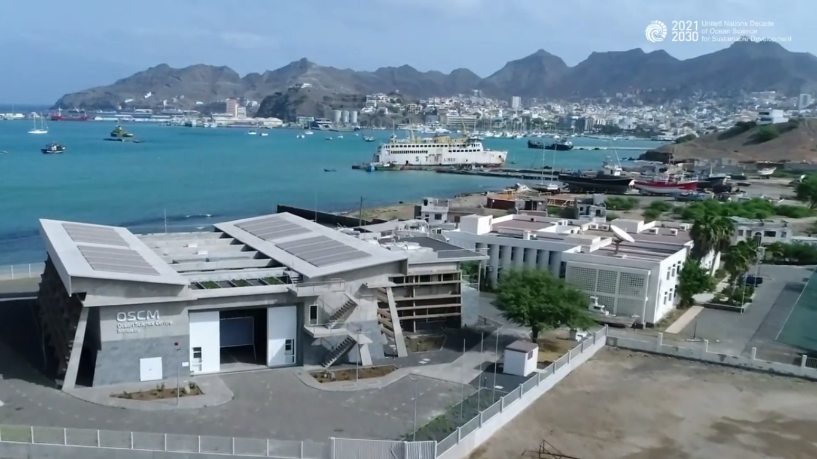 Ivanice Monteiro Silva, marine biologist and Laboratory’s Manager at the Ocean Science Center Mindelo, is researching the effects of climate change on the marine environment. She observes increase in water temperature and sea-level rise and hopes that one outcome of the Ocean Decade that people understand the importance of the ocean in our earthly experience. 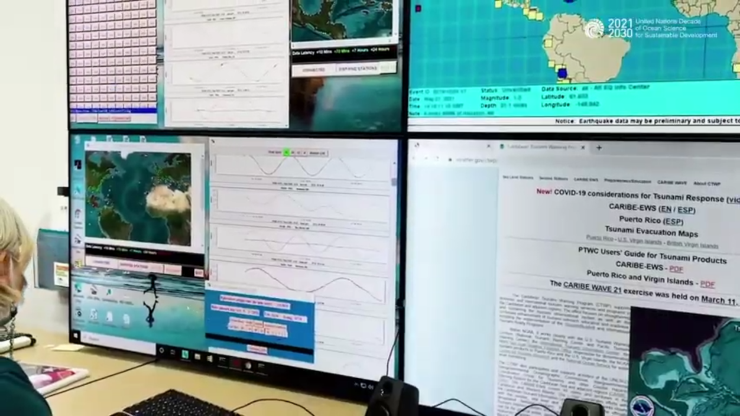 Christa von Hillebrandt-Andrade is the Manager of the Caribbean Tsunami Program and knows that “the basis of hazard warning systems is collaboration and partnership”. She argues that no country can operate a tsunami warning system without collaboration with partners and scientists and emphasizes the importance of data sharing. 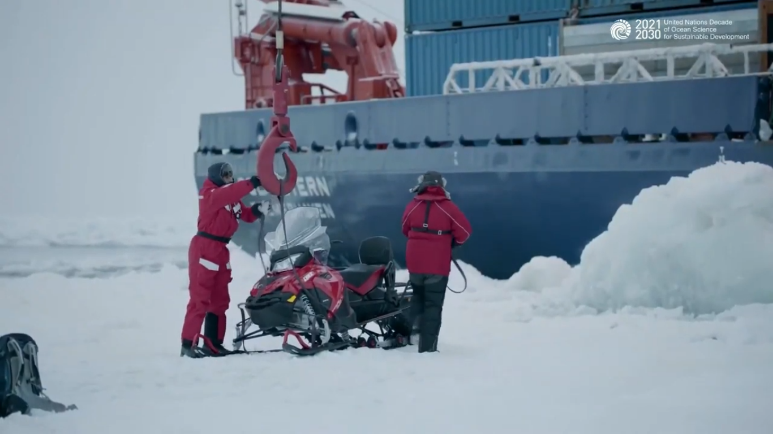 The research vessel “Polarstern” is frozen for one year in the Arctic ice to study the climate processes of the Central Arctic- the epicenter of climate change.

Prof. Dr. Markus Rex introduced the MOSAIC expedition in the Arctic Ocean, bringing together 80 institutions from 20 nations, showing that international collaboration is necessary and pointing to the urgent need to reduce greenhouse gas emissions to prevent the Artic from becoming ice-free in summer in a few decades to come with its devastating consequences. 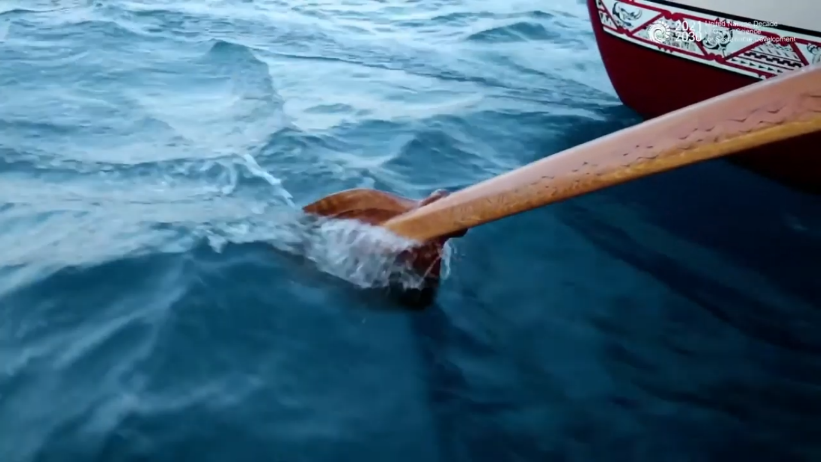 Dr. Ian Schipper from the Victoria University of Wellington, New Zealand studies volcanic eruptions and their effects on the environment. The research was undertaken in collaboration with local communities, who identified the location of existing submarine volcanoes – an impossible task without local knowledge. 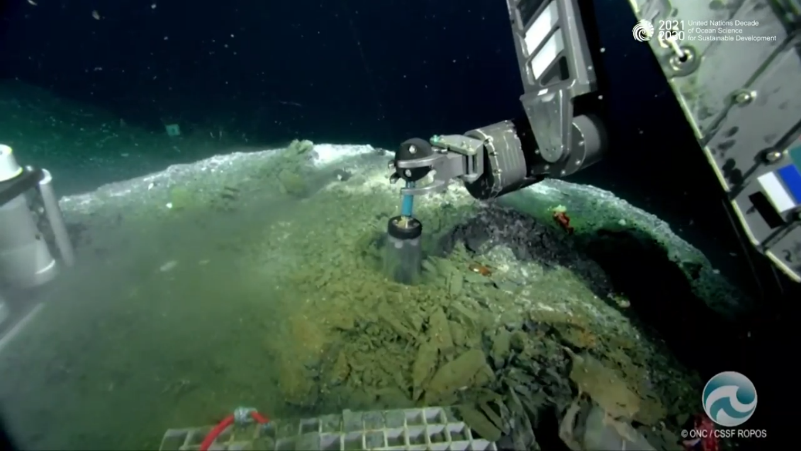 Kate Moran, president and CEO of Ocean Networks Canada is monitoring the ocean, seeking to understand it further. The Ocean Decade can serve in her opinion to make people understand the ocean’s contribution to humanity. She hopes that such public awareness would drive society to reduce its greenhouse gas emissions more rapidly.

Including all Voices: Scientific Process as a Cultural Dialogue

To live in harmony with nature “science, technology and innovations to protect our oceans are vital” Inger Andersen, Under-Secretary-General of the United Nations and Executive Director of the United Nations Environment Programme. The UN Ocean Decade seeks to be the connection between science, policy and society. But how can we create the ocean we want? On the roundtable “the science we need for the ocean we want”, Peter Thomson, (Ambassador / UNSG Special Envoy for the Ocean), The Honorable Dr. Jane Lubchenco  (Deputy Director for Climate and Environment, White House Office of Science and Technology Policy) and Dr. Vladimir Ryabinin (Executive Secretary of IOC- UNESCO) elaborated on the importance of science on the one hand, but also on the need for inclusivity.

It is important to embrace the diversity of our society in generating knowledge. This was an underlying theme throughout the conference. Integrated ocean science agendas are required to meet societal needs (Dr. Bruno Oberle, Director General, International Union for Conservation of Nature (IUCN)). Dr. Heide Hackmann, Chief Executive Officer of the International Science Council, points to the importance to connect science to policy across time scales and levels of governance and contexts, which depends on international cooperation and inclusivity. Inclusivity, referring not only to the diversity of scientific communities, but also to include the marginalized voices within scientific communities. For this UN Decade of Ocean Science for Sustainable Development, all voices need to be heard, including: governments, NGOs, the business sector, and civil society. But not only that: The Ocean Decade is now an opportunity to embrace full diversity, including trans- and interdisciplinarity, including social sciences, diversity of men, women and queers, different age groups, religions and cultures, as well as an active engagement with indigenous peoples and local communities.

An Unequal Ocean: The need for International Collaboration and Capacity Building

An important part of including all voices also regards the need for international collaboration and capacity building. The geographical imbalance of states to undertake marine scientific research (Tessnow-von Wysocki & Vadrot, 2020; Tolochko & Vadrot, 2021) were put into focus by a number of speakers. As “not every region is equal” (Dr. Elva Escobar Briones, Professor in Oceanography, Instituto de Ciencias del Mar y Limnología (ICML) UNAM), fair capacity building and technology transfer is a crucial pillar in the UN Decade of Ocean Science for Sustainable Development.

Data sharing goes hand in hand with capacity building and the transfer of marine technology. However, it is important, as it was mentioned in the panel on “The Ocean Decade from End to End”, that efforts do not stop at data collection and sharing, but also include creation and co-design of knowledge among a variety of stakeholders and actor groups and forms of knowledge involved. Industry can play an important role in making data available and contributing to partnerships in this regard.

Sanda Ojiambo, Executive Director & CEO, United Nations Global Compact, emphasised in the “Visions and Missions” panel that companies can protect the ocean through collaborating with science. Moreover, the private sector itself can contribute to ocean science, innovate technologies, improve our understanding of the ocean by sharing ocean data and engaging international dialogue. The inclusion of the private sector was also prominent in the “The Ocean Decade from End to End” panel. Marc Heine, Chief Executive Officer of Fugro, explains the expertise of his company to collect ocean data and criticises that -while the private sector is interested in contributing to ocean stewardship- incentives are still lacking for companies to provide access to their data, which the Ocean Decade could support. The oil and gas industry will now need to look towards more sustainable ways to generate energy. Partnerships were identified as crucial in data collection and sharing, as well as in knowledge generation. Prof. Dr. Gideon Henderson, Chief Scientific Adviser, Department for Environment, Food and Rural Affairs (Defra), United Kingdom, underlines the importance of an internationally created agenda for ocean science and the role of the G7 and international cooperation to tackle global problems. At the same time, however, Ken Paul (First Nations, Canada) who shared traditional ways of living in harmony with nature is worried that “A lot of times, our science isn’t there necessarily to understand the ecosystem – it’s to help improve economic benefits.” (Ken Paul, First Nations) and that the direction of scientific production and use needs to be thought through in light of the Decade.

Starting the Decade with long-term thinking for the Ocean

Another main theme across the conference’s panellists and participants was the need for long-term goals: there needs to be a shift to more long-term thinking in decision-making on the future of the ocean. As Ken Paul (First Nations) puts it: “We have to think seven generations ahead”. This long-term thinking has unfortunately been missing from everyday politics and was encouraged by panellists, such as Peter Ng, from Singapore.

The Ocean Decade Laboratories, initiated through the Ocean Decade, were presented towards the end of the launch: They offer an opportunity for all stakeholders to engage in “satellite activities”, which will be presented in 48h time slots around the globe. Ideas include  “pitch sessions” for new Ocean Decade programs or projects that are looking for partners, announcements of Decade Actions or commitments, Decade Action design workshops or networking forums, skills training and virtual exhibitions. Applications remain open and invite a diversity of participants.

Final words of the launch included the importance to raise awareness about our interdependence with the ocean and bring together different voices to generate ocean science to meet diverse societal needs. Ocean literacy, coastal resilience and recognition of cultural values of the ocean are only the beginning. Connections between stakeholders will be facilitated by the Decade: A global stakeholder platform will be launched at the end of the year and a Decade Alliance will be created to form a network for experts and investors.

At the table with the next generation

Lobby of the Virtual ECOP Days

The MARIPOLDATA team was represented at the conference to support the United Nations Decade of Ocean Science for Sustainable Development and show our contribution from a marine social science perspective on marine biodiversity politics in the ongoing legally binding agreement for the conservation and sustainable use of marine biodiversity beyond national jurisdiction. Participants in the conference could stop by the MARIPOLDATA virtual booth to get to know the team and ask questions regarding our latest publications and project events.

The full event can be watched here: https://www.youtube.com/watch?v=BPBjWEe9IIM