Between August 19th and August 31st, the UN headquarters in New York host the third intergovernmental conference (IGC 3) on an international legally binding instrument for the conservation and sustainable use of marine biological diversity in areas beyond national jurisdiction (BBNJ). The MARIPOLDATA team is using this opportunity to observe and analyze the negotiations and conduct interviews with delegates from State Parties and non-governmental organizations (NGOs), including scientists. These are the impressions of the first week of negotiations.

In the previous conferences, the delegations exchanged views on the four items of the draft agreement: marine genetic resources (MGRs), area-based management tools (ABMTs), including marine protected areas (MPAs), environmental impact assessments (EIAs), capacity building and the transfer of marine technology (CB&TT), as well as on cross-cutting issues such as the institutional set-up and the relation of the new treaty to other existing sectoral or regional regimes that currently govern the oceans. On the basis of this exchange of opinions, the presidency circulated a President’s Aid for negotiations at IGC 2, which forms the basis for a  zero draft document.  For the first time since the initiation of the BBNJ process there is a document containing treaty language. 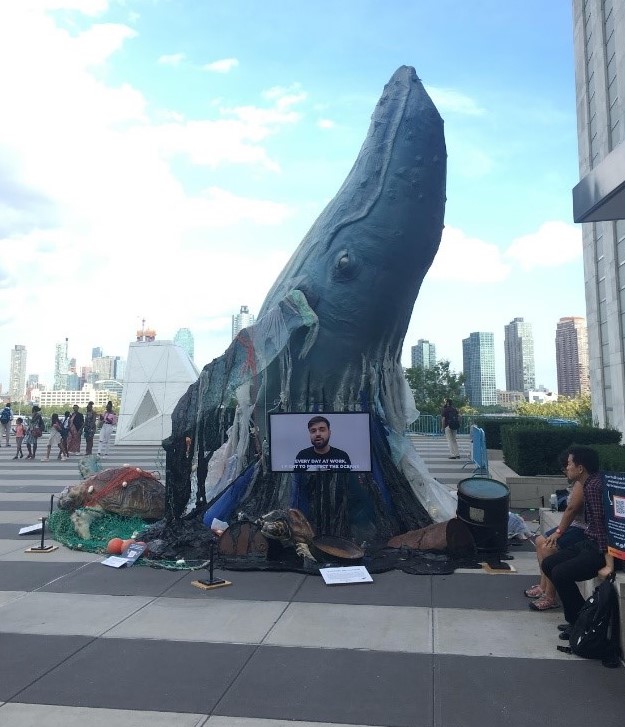 Here at IGC 3, the negotiations have entered into a decisive phase, in which delegations need to negotiate and compromise on the individual provisions of the treaty. To set the scene for crucial days of negotiations, Greenpeace, the High Seas Alliance (HSA) and the International Union for Conservation of Nature (IUCN) collaborated to install a large figure of a whale erupting from a sea of plastic trash on the UN terrace and the High Seas Alliance together with the Turkish Marine Research Foundation installed a photographic exhibition to increase awareness for marine conservation. 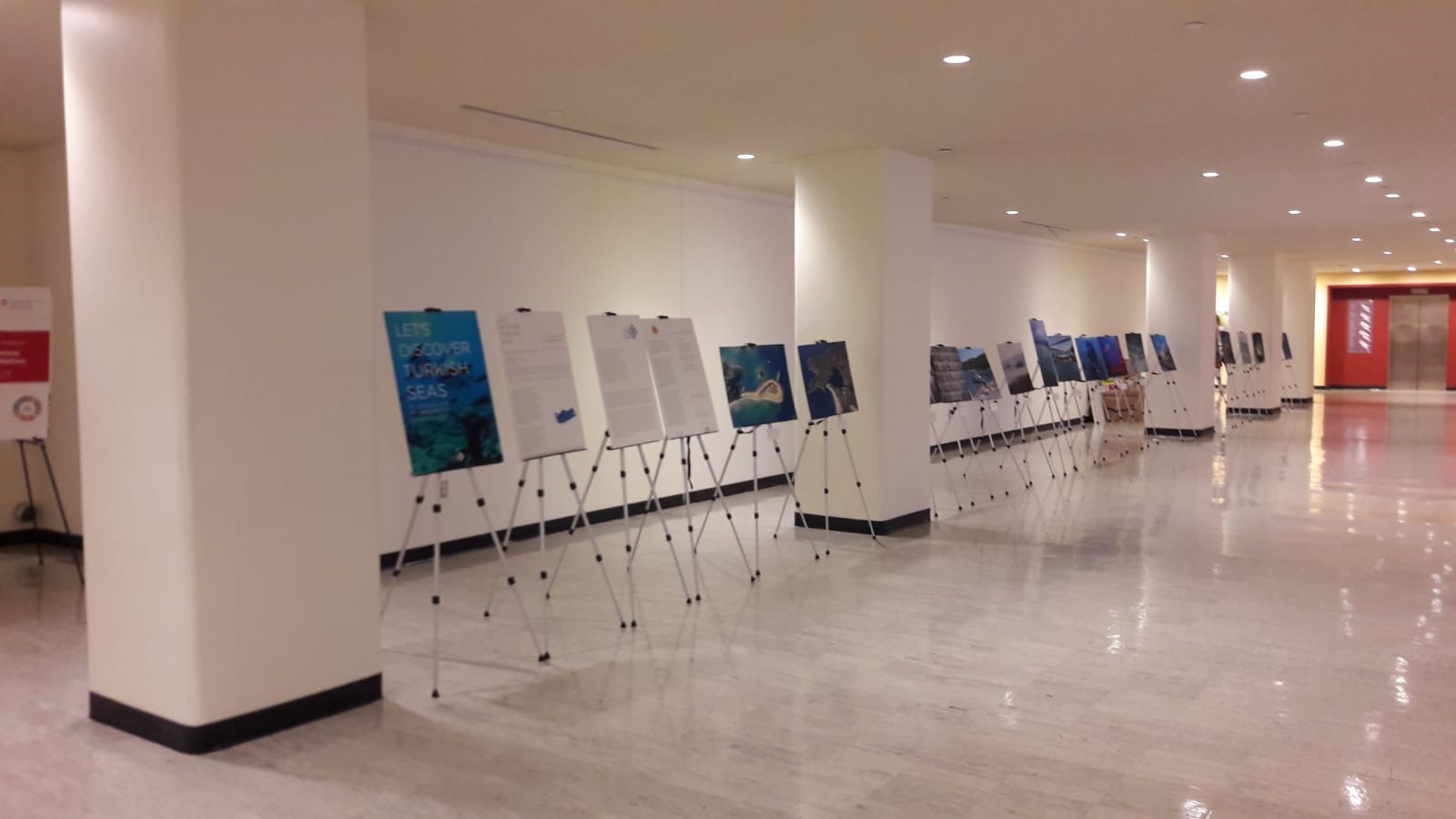 A beautiful morning together 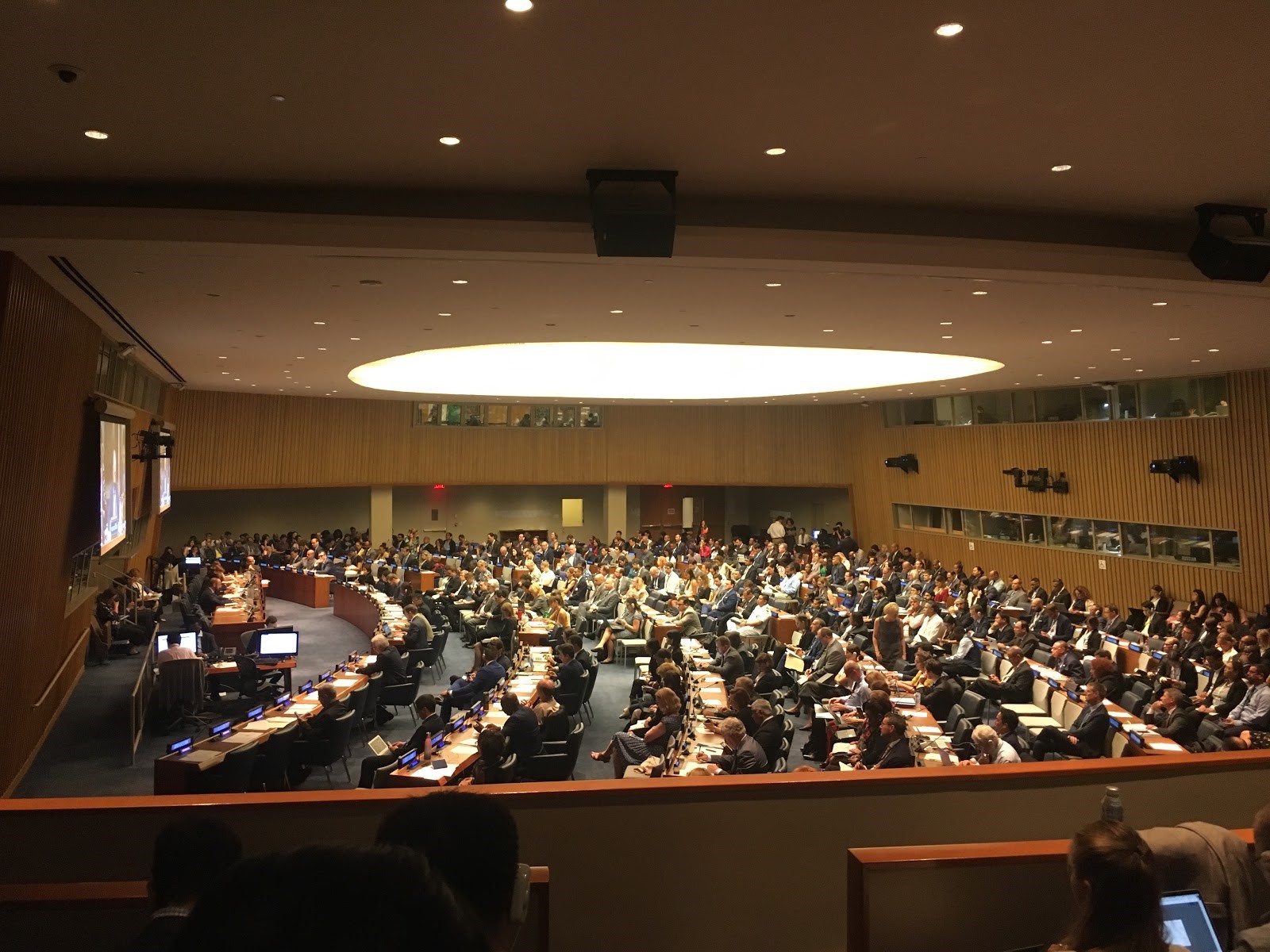 During the first days, the delegations started discussing the topics of CB&TT and ABMTs and cross-cutting issues. The good and collegial atmosphere that existed between the delegates during IGC 2 was successfully carried over to IGC 3, particularly when the delegate from the Federated States of Micronesia welcomed the facilitator of the informal working group on area-based management tools with the words: “We thank you for bringing ABMT to us – another beautiful morning together”.

Regardless of the friendly atmosphere, negotiators were ready to go directly to the heart of matters. When the countries delivered their opening statements for the upcoming session, representatives of delegations and observers from NGOs, IGOs and many regional seas or fisheries organizations filled all seats of the plenary hall.

It became clear that not only the good atmosphere but also the substantial disagreements were carried straight from IGC 2 to IGC 3 and directly addressed in the opening statements. Palestine, on behalf of the group of the G77 and China, representing 134 countries, as well as the group of Least Developed Countries (LDCs) strongly voiced the demand to the see the principle of “common heritage of mankind” in the treaty text and also Algeria on behalf of the African Group representing 54 African states noted that the principle is absent but that the spirit is sometimes present. This principle, which already in the conferences building up to the third IGC was identified as possibly one of the key issues of contention, had surprisingly been taken out of the zero draft text.

Disagreement also emerged in discussions on Article 3, concerning the paragraph dealing with exceptions for state vessels and warships. Some countries argued that this should not be questioned, as it falls under the freedom of the seas under UNCLOS. Others raised the concern that state vessels could engage in marine research and make use of marine genetic resources. This would be a problem if the agreement wants to guarantee equitable and fair benefit sharing of resources. Furthermore, the debate whether the instrument should refer to the precautionary principle or a precautionary approach remained without agreement at the end of the week. States also raised concerns regarding the lack of common definitions for a number of matters such as criteria for area-based management tools.

Informally negotiating in “informal informals” and restrictions for NGOs 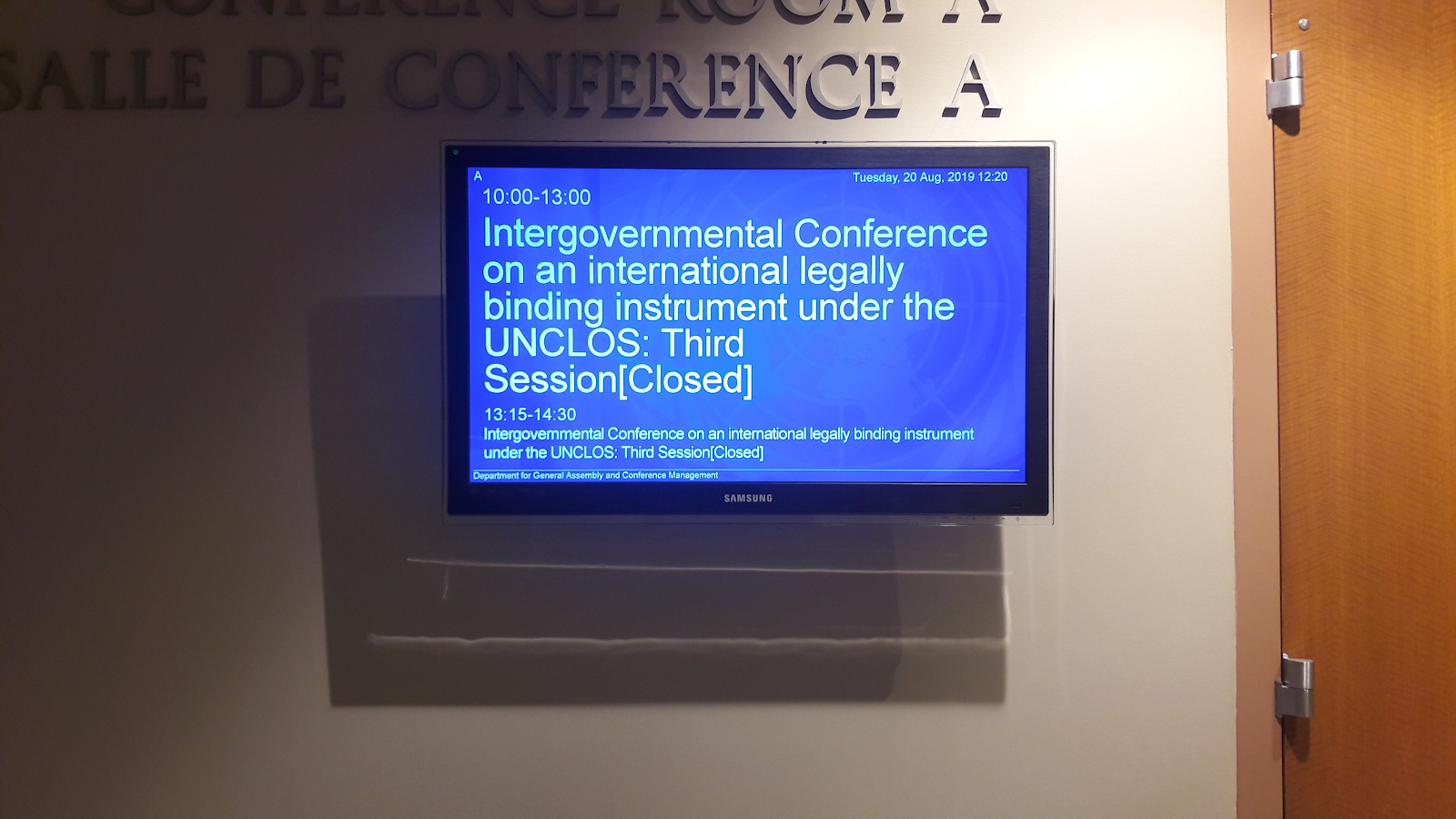 The third IGC introduced to the conference a new negotiation format. In “informal informals” states can now debate and negotiate more informally than in discussions in the working groups and the plenary, and without the presence of the media and the ENB reporters. The presidency hopes that in this way, the delegates can respond to and address issues much more directly.

In order to still ensure a level of transparency, the NGO sector was allocated a total number of five seats which have to be shared by all participating NGOs. The fact that NGOs were granted – albeit limited – access to informal informals, was perceived as a very NGO-friendly policy and a large step towards transparent policy-making. However, they would not be able to intervene in this setting and due to limited capacity in the conference room, the more than 40 NGOs needed to decide amongst one another, who could sit in the informal negotiations. In order to coordinate between themselves which NGO – according to its specific interest and expertise – can sit in which informal informals session, a daily NGO meeting was set up each morning before the negotiations.

Apart from the discussions in the plenary and the informal informals, a variety of closed coordination meetings, bilateral and multilateral discussions took place throughout the week in which delegates could exchange views and discuss key issues amongst a smaller group.

The relationship of the evolving BBNJ instrument to other existing sectoral and regional bodies established under the UN system such as the Convention on Biological Diversity (CBD), the Food and Agricultural Organization (FAO) or Regional fisheries management organisations (RFMOs) was a prominent topic during the first week. The treaty that is being developed possibly affects all areas of the world´s ocean and different topics of international politics such as fishing, mining, shipping, communication through the use of deep sea cables, deep sea exploration and scientific cooperation.

Because the potential reach is global and many areas are governed by different and already existing bodies, the question of how to relate a new treaty to the existing frameworks is a crucial one. A new treaty will not exist independently of other international regimes and will eventually function within a regime complex where negotiators fear to create a structure that is contradictory, duplicative and where different bodies compete with each other for competences.

This fear could clearly be observed in the discussions on different parts of the draft text. Concerning the issue of capacity building and the transfer of marine technology, many states noted that various initiatives through which states assist each other in building capacity in marine research already exist. When addressing area-based management tools such as marine protected areas, the negotiators also noted that different institutions already have different systems to identify and designate areas for protective purposes.

A lot of reference was made to the so-called EBSA process under the hospices of the CBD which gives a scientific recommendation to identify ecologically or significant marine areas. Different regional seas and fisheries organizations such as the North East Atlantic Fisheries Commission (NEAFC) also already have a system in place, through which certain areas are put under protection by member states of these agreements.

The question now is: What will happen to these existing marine protected areas when other or similar areas are established globally under the new treaty? It was thus not surprising to observe that a large number of existing organizations are present at the negotiations and a number of side events were organized on the topic of inter- institutional cooperation.

How much science in BBNJ?

Reference to the importance of best available science and knowledge in the BBNJ process was repeatedly made by delegates in the first week, as well as presenters at side events. New technologies based on satellite images and environmental DNA (eDNA) can be used to track species and provide information on the establishment of marine protected areas, and potentially to scan the sea-floor for DNA of undiscovered marine genetic resources. Various side events highlighted the importance of science for the BBNJ process. The FAO side event on multi-institutional collaboration in ABNJ gave an overview of existing capacity building initiatives and North-South collaborations. The CBD and the Global Ocean Biodiversity Initiative emphasized the need for new science for the management of area-based management tools in ABNJ.

There seemed to be general agreement on the wording scientific “body”, over scientific “network”, however, no agreement on the role of such a scientific body and its competences. Various states highlighted the importance of a scientific body as an advisory body for states, however, neither with a mandate to identify and establish ABMTs, nor to initiate or conduct EIAs. The room largely agreed that this responsibility should remain with states. Many countries, including Belize, Tuvalu, Fiji, Micronesia and Myanmar highlighted the significance of other forms of knowledge such as traditional and indigenous knowledge to contribute to an effective implementation agreement – a contribution that was welcomed by a number of other states throughout the week and raised in regard to all the different articles of the draft agreement.

Regardless of the progress made so far, much work remains to be done in the second week. Unresolved disagreements will need to be compromised by state delegations in order to find a common ground for the new instrument. The work on certain specifics of all four elements of the agreement will need to be discussed and informal informals are again scheduled throughout the week, apart from the plenary and working group sessions. On the weekend, delegates showed great interest for workshops on MGRs and the science-policy interface in the BBNJ process, where policy-makers and scientists could clarify scientific definitions and identify the process of current pre- and post-cruise data sharing.

At the end of the day, the stakeholders left with a more aligned understanding of the implications of the instrument, however, it also showed that science and policy still talk different languages and there is the need for further exchange.

We are now looking forward to another IGC3 week, hoping that we will get one step closer to finding common ground on the key elements of the BBNJ treaty to conserve and sustainably manage marine biodiversity and ideally, text on how to address and reduce the unequal distribution of marine science, resources and data infrastructures.

This article has been written by Arne Langlet and Ina Tessnow-von Wysocki.