ASC) from the 1st to the 5th of July at the Pontifical Catholic University of Peru in Lima brought together academics, practitioners and policy makers from almost 50 countries to discuss challenges, innovation and current research for the commons. Over 500 presenters shared their work from different academic disciplines. The conference highlighted the importance of the protection of the oceans as a global common and the need for dialogue between different knowledge systems. It provided an opportunity to present the research I had worked on proposing a design for a potential Plastics Treaty to eliminate marine plastic pollution.

Commons, or public goods, are defined as goods that are collectively owned by a certain group or entirely shared. This includes services to the population provided by the State, such as roads and public internet, as well as the natural environment with commonly shared land or water resources. Some of these goods are global and therefore have a particular importance. Global commons benefit all – including current and future generations – and their overexploitation in one part of the world has effects on a global level. The protection of global commons is therefore only possible with international cooperation. Examples of global commons are the atmosphere, space and our ocean.

Throughout the week, topics of the conference sessions included local and global commons, theories and history of the commons, gender balance in commons management, conflicts regarding land use between different groups and stakeholders, as well as urban commons and behavioural experiments regarding conservation practices. Various panels, multi-stakeholder dialogues, poster sessions and book presentations offered an opportunity for the participants to present and reflect on own research, exchange views with peers and develop new ideas for future projects. Regional meetings connected researchers from Europe, Latin America, Africa and Asia and encouraged further exchange and collaboration across disciplines and methodological approaches between the continents. Professional translators provided simultaneous translations in the sessions held in English and Spanish. Some discussions allowed for exchange in indigenous languages.

The conference was guided by the sense that common goods cannot be managed with a sole focus on natural science, but also need to include social and cultural dimensions. The multi-stakeholder dialogue “Negotiating a way towards consilience in managing conflicts over commons” initiated discussions among the participants to identify barriers to negotiation, namely that relations, values and needs often remain overlooked. It was also noted that identity, historical mistrust and fear of change can prevent stakeholders from coming together. In the Panel “Theory of the Commons” Yara Al Salman, PhD candidate at the Ethics Institute of Utrecht University, evaluated institutions from a moral perspective using a political philosophy approach and the theory of fair power allocation. She approached the question what people should have control over, arguing that there needs to be internal democracy, all users need to be included and exclusion has to be justified, without being the product of inequality in power or economic injustice.

One of the conference highlights was the ceremony for the Elinor Ostrom Award to acknowledge the work of practitioners, young and senior scholars involved in the field of the commons. Elinor Ostrom (1933-2012) promoted a paradigm shift in political science and economics by challenging the “Tragedy of the Commons” – the vision that self-interested individuals strive for benefit maximisation with the outcome of depleting the commons. In her work “Governing the Commons: The Evolution of Institutions for Collective Action (1990)”, she developed design principles on how to sustainably manage commons and demonstrated that cooperation is indeed possible, leading to sustainable handling of the commons, without the need for regulation by central authorities or privatization.

The conference connected science with art, recognising the importance of imagination and sensitivity of all the senses to promote mobilisation for the protection of the commons. Throughout the week, participants could attend the Ostrom film festival screenings, including documentaries and short films. The documentary “Pacificum” portrayed Peruvian settlers’ ancient relationship of respect and devotion to the marine environment, as well as the evolutionary history of our oceans. We will show this documentary as part of the MARIPOLDATA cinema.

The Ocean as a global common 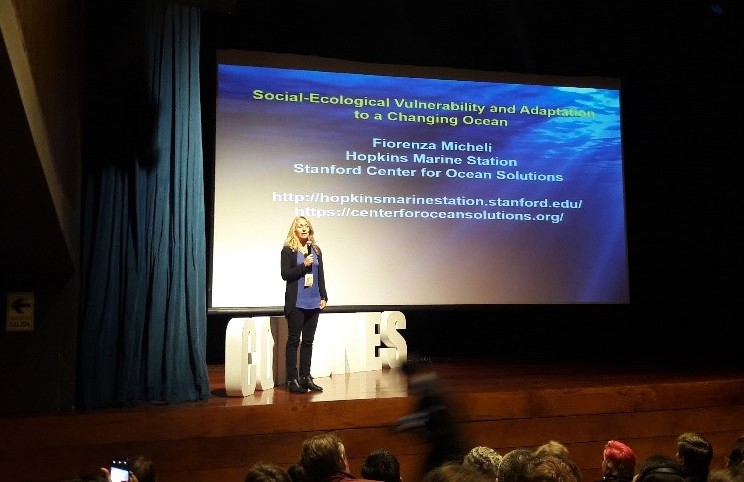 On day one of the conference, Keynote speaker Fiorenza Micheli, marine ecologist and conservation biologist from the Hopkins Marine Station of Stanford University and the Center for Ocean Solutions, drew attention to the importance of our oceans as a global common. She gave a talk on the social-ecological vulnerability and adaptation to a changing ocean. Emphasizing the challenges of overfishing, ocean acidification, pollution and extraction affecting our oceans, she quoted Lubchenco and Gaines (2019) that “now is the moment for more scientists to pivot from simply documenting the tragedy underway to also creating scalable solutions”. She reminded of the importance of our oceans for food production and nutrient security, suggesting that examples of successful solutions can foster positive change. In the questions and answers after her talk, her advice to Early Researchers was: “Collaborate a lot and early and be curious”. She stressed the need for interdisciplinary collaboration, incorporating multiple disciplines and methods. Micheli called for action regarding the problem of marine plastic pollution, indicated however, that there are further challenges facing our oceans which are not as visible, such as ocean acidification.

The following days of the conference also offered room for exchange on sustainable handling of our oceans. The panel “Global Commons” provided an opportunity for me to present my research on a potential design of a Global Plastics Treaty to eliminate marine plastic pollution. Current efforts to eliminate marine plastic pollution have failed so far and an internationally legally binding agreement has the potential to overcome current governance gaps. But what needs to be considered when drafting such a treaty? My master thesis was developed into the article “Plastics at Sea: Treaty design for a global solution to marine plastic pollution”, co-authored with Philippe Le Billon, Professor at the University of British Columbia. The main arguments of the paper are the importance of including a) the principle of common but diﬀerentiated responsibilities; b) an adequate scope considering land-and sea-based sources, as well as chemical additives and all stages of the lifecycle of plastics; c) issue-linkage to international plastics trade; d) a ﬁnancial mechanism to support implementation measures; e) built-in ﬂexibility to adapt to changes; f) eﬀective monitoring, reporting and review procedures; and g) enforcement through incentivising compliance and deterring non-compliance. The audience showed great interest in the topic and raised the idea to direct this research to stakeholders in order to help its way to implementation.

Chair of the panel on Global Commons, Achim Schlüter, Professor for Social Systems and Ecological Economics, from the Leibniz Center for Tropical Marine Research (ZMT), Bremen, Germany, presented on the privatisation of the oceans, including resources, space, governance and knowledge. Actors differ in their interests and needs and act within existing power asymmetries. As motivations and drivers of such privatisation, he named overexploitation, excludability and rivalry problems, blue growth, the creation of new products and innovation incentives. Distribution efforts, however, risk excluding the ones who need it the most from the use of space and resources and key knowledge that allows for high profits could exclude the most vulnerable. Questions regarding the access to and exploitation of resources and ocean space are also the central issues that the BBNJ treaty aims to address. It can be seen that there are substantial overlaps between the challenges and opportunities of commons management in coastal areas and in Areas Beyond National Jurisdiction (ABNJ). 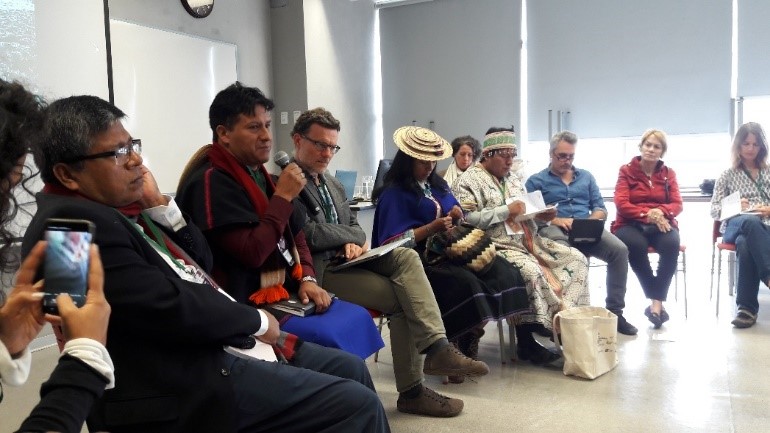 Conference participants in the multi-stakeholder dialogue with indigenous people

Indigenous knowledge for the protection of the commons

The importance of indigenous, traditional and local knowledge in protecting the commons was emphasised throughout the conference with several sessions, presentations, multi-stakeholder dialogues, movies and key notes. Examples of indigenous knowledge systems and science collaborations, the role of the communities in managing commons, as well as their relationship to Mother Earth shed light on the diversity of knowledge. The multi-stakeholder dialogue “How can indigenous governance models, such as Plan de Vida, help protect the commons at a time of global environmental crises?” brought conference participants in exchange with Gil Inoach (Awajún CORPI-SL), Wrays Perez (Wampis Autonomous Territorial Government) and Julio Cusurichi (Shipibo-FENAMAD), Liliana Pechene and Jeremias Tunubala (Misak local community activists and Plan de Vida practitioners).

While the majority of sessions focused on commons on the local and regional level, much can be transferred to the case of the oceans as a global common. Conflicts over access to resources, the interdependency of different stakeholders, a moral responsibility to take into account the existence of future generations and differing concepts of knowledge to manage the commons are prevalent in cases of local commons, as much as in the BBNJ negotiations. How the stakeholders with their different capacities will account for the diverse knowledge systems to be included in the negotiations will be central for the outcome of a BBNJ agreement.