Bringing together the Atlantic Research Community

On the 6th and 7th of February 2020, I attended on behalf of the MARIPOLDATA team the All-Atlantic Ocean Research Forum hosted by the European Commission. With the vision to strengthen the Atlantic community, the event gathered around 700 policy makers, scientists, civil society and business representatives. The participants came from the All-Atlantic Research Alliance members: European Union, USA, Canada, Brazil, South Africa, Cape Verde and Argentina. Representatives of the very diverse scientific community doing research in or for the ocean included oceanographers, geologists, ecologists, biologists but also social and data scientists as well as many other fields. Furthermore, businesses and civil society actors that address oceanic and environmental issues were present and mixed with the scientists and policy makers during the many networking breaks. On top of that, Mariya Gabriel, European Commissioner for Innovation, Research, Culture, Education and Youth launched the All-Atlantic Ocean Youth Forum which invited 23 Youth Ambassadors to learn from and engage with political, social, economic and scientific leaders.

The conference gave an overview about the progress in marine research cooperation that the European Union and its partners across the Atlantic Ocean have achieved since the signing of the Galway Statement on Atlantic Ocean Cooperation (EU – US – Canada) and the Belém Statement on Atlantic Research and Innovation Cooperation (EU – Brazil – South Africa) in 2017. These declarations initiated political efforts to integrate and commonly undertake research activities all across the Atlantic Ocean. The two-day All Atlantic Research Forum now brought the oceanic community together, displaying the results and outcomes of this research cooperation, while also defining a vision to continue and strengthen the international cooperation in the upcoming years. In the following, I will give an overview over the main themes and learnings from the event and how and why they matter for the ongoing negotiations on a legally binding instrument for the conservation and sustainable use of Biodiversity in areas Beyond National Jurisdiction (BBNJ).

I participated in the conference in my capacity as a PhD student within the ERC project MARIPOLDATA to learn about the status of Atlantic Ocean research cooperation and about the relations between science and policy-making in this process.

This discussion on the science-policy interface links the All Atlantic Research Forum to the ongoing negotiations of a new legally-binding treaty under the UN Convention on the Law of the Sea aiming at the protection of marine biodiversity. The BBNJ negotiations will go into the fourth intergovernmental session from March 23 to April 4 2020 at the UN Headquarters in New York. Effective science-policy interrelations are crucial for the formulation and implementation of an effective and ambitious treaty and serve as the research focus for the MARIPOLDATA project.

With an eye on the upcoming BBNJ negotiation session, what can we learn from the practice of international scientific cooperation exhibited at the All-Atlantic Ocean Research Forum? 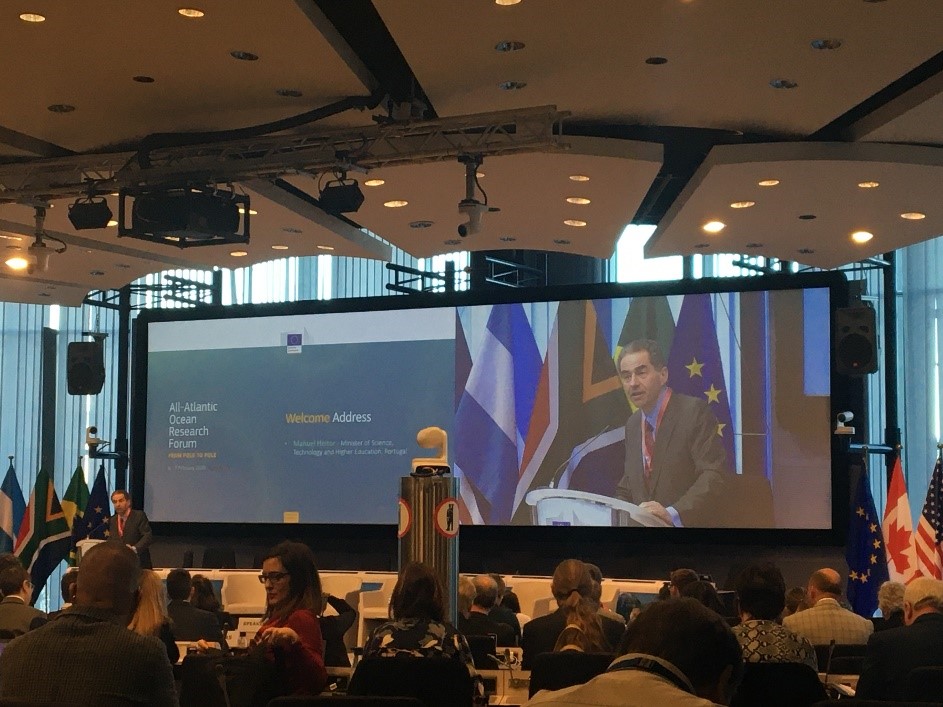 Manuel Heitor, Minister of Science, Technology and Higher Education, Portugal welcomes the participants during the second day, highlighting the importance of international cooperation between scientists and civil society to achieve “science for a better community”

To begin with, international scientific cooperation across the Atlantic Ocean basin exists and flourishes. The sea not only separates but also connects continents and countries. The efforts of the Atlantic ocean research community to explore and understand the ocean from north to south (pole to pole) and from the surface to the bottom are an excellent example of how international scientific cooperation looks like and how such science diplomacy contributes to building trust, capacity and a common understanding of the ocean´s problems.

The importance of cooperation in the organization of common expeditions and cruises as well as in the maintenance of data infrastructures and open sharing of data was repeatedly highlighted and demonstrated through practical examples. International cooperation initiatives such as the Horizon 2020 funded AtlantOS Ocean observing program or the Atlantic International Research center are the concrete fruits of the political will to team up for exploring the ocean.

Many of the topics discussed at the All Atlantic Ocean Research Forum also play a role in the context of the BBNJ negotiations. For example, all thematic sessions addressed questions on the sharing and exchanging of scientific data, be it in relation to the work of IPBES on terrestrial biodiversity data or the use of data for hydrographic services. The scientific community at the Forum discussed how to bring data from different sources together and how standards for data formats and metadata can be agreed upon in light of different scientific realities and cultures of scientific enquiry. A very similar discussion is taking place in the BBNJ negotiations. 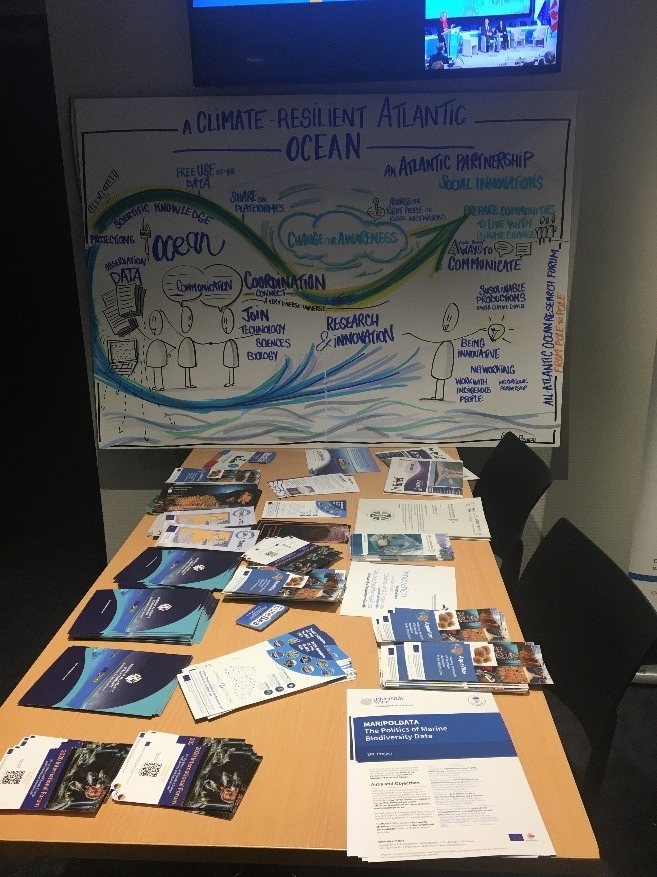 MARIPOLDATA was present amongst many other initiatives

In the framework of the Atlantic scientific cooperation, the European Commission invested in a number of open data initiatives such as the Copernicus Marine Environment Monitoring Services which provides free access to environmental monitoring data from satellites, weather stations, ocean buoys and a range of other sources. But also private sector projects such as Fugro through the seabed mapping project, increasingly make data publicly available to the scientific and public community.

While the road towards open access for everyone is long, the conference participants confirmed that as one All Atlantic Youth Ambassador claimed it: “ocean data belongs to everyone and everyone should have access to it”.

The All Atlantic Research Forum acknowledges, as does the MARIPOLDATA project, the large inequalities in the capacities and economic resources to conduct ocean science. These inequalities are one of the largest obstacles to the creation of a common understanding of the environmental, societal and economical challenges and opportunities that the Atlantic represents. Particularly the dense and institutionalized cooperation networks between European scientists are a resource that African researchers cannot rely upon.

On the importance of the science to policy (and society) interface:

Most importantly however, all participants agreed that the importance of science-policy interrelations has so far been understated and needs to be significantly strengthened in any future scientific cooperation initiatives or in international fora such as the BBNJ negotiations. In the BBNJ negotiations, we observe that many states use scientific claims to exert influence on the treaty draft text. The institutionalization of the science-policy interface in a possible upcoming treaty is yet undefined and feeds the research of the MARIPOLDATA project.

As Pascal Lamy, Chair of the Horizon Europe Mission Healthy Oceans, Seas, Coastal and Inland Waters, formulated it quite fittingly: “There is a long bridge between science and politics and we have had a big problem crossing this bridge”. In consequence, many panels at the Research Forum tackled questions on how to better communicate scientific findings, support political decisions with scientific knowledge and create awareness for ocean issues amongst the public or policy makers. One finding was that the interface between science and society or politics needs to receive increased attention and investments.

Panelists especially highlighted the role of scientific communication and storytelling, in order to reach and stronger include society into ocean research and protection. The BBC Blue Planet documentaries for example have managed to make large audiences aware of plastic pollution in the oceans. Storytelling and good communication can establish an emotional connection to the ocean. 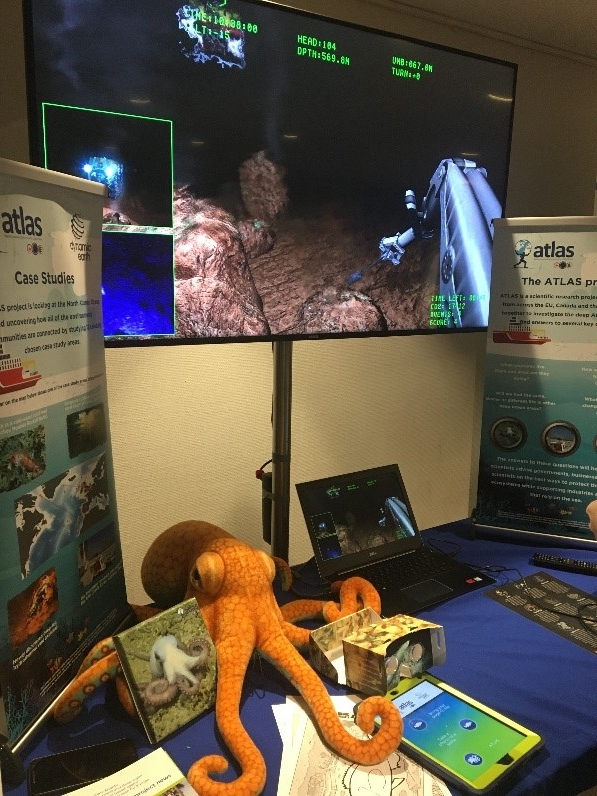 Ways to connect the Atlantic Ocean to Citizens: experiencing the thrill of being an oceanographer via video games 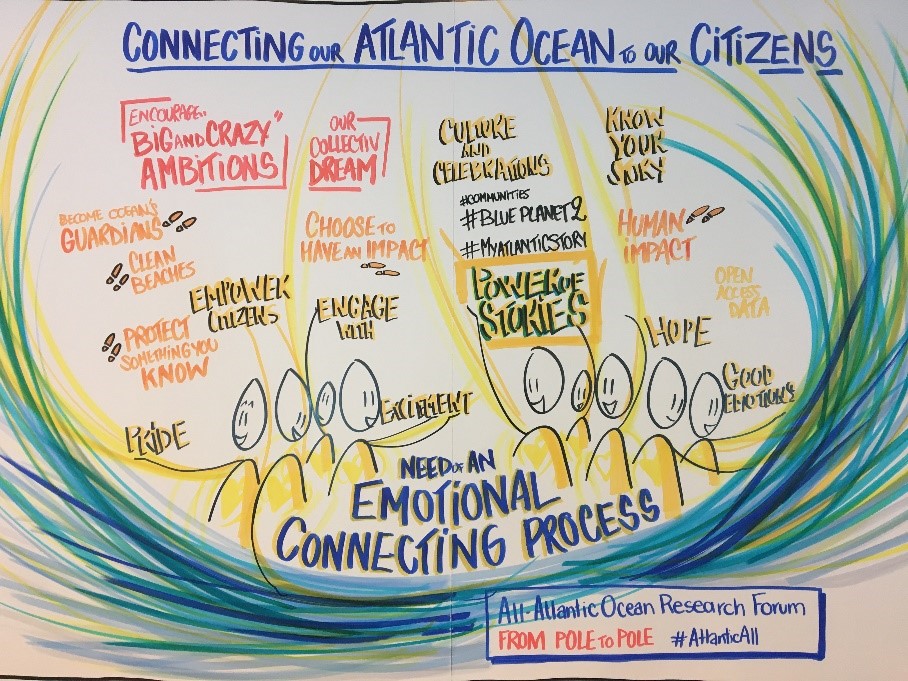 Ways to connect the Atlantic Ocean to Citizens: stories that create an emotional connection

The Atlantic Ocean, as other ocean ecosystems, is undergoing profound changes that are well- documented in the IPCC Special Report on Oceans and Cryosphere and the IPBES Global Assessment Report on Biodiversity and Ecosystem Services. In order to reach any ocean-related environmental target such as the SDG 14 on the conservation and sustainable use of the ocean, a broad and strong alliance between governments, science, businesses, civil society and education needs to contribute to understanding and sustainably managing our oceans.

The All Atlantic Ocean Research Forum gave political impetus for transnational scientific cooperation to support the implementation of the UN Decade of Ocean Science for Sustainable Development. It also fostered international networks between scientists, civil society and businesses that may contribute to reaching the priorities such as the European Green Deal, the Horizon Europe Mission Healthy Oceans, Seas, Coastal and Inland Waters and other national or regional commitments.

For me, the All Atlantic Ocean Research Forum was an exciting exhibition of current international cooperation in ocean research. I was able to learn a lot about the practices of the many research initiatives that were present at the Forum. The MARIPOLDATA project can contribute to better understand some of the challenges to connect the science to political and societal processes.