Governments are currently engaged in Online Intersessional work to keep the momentum for a new Treaty to protect marine biodiversity beyond national jurisdiction (BBNJ). While online formats do not replace formal negotiations, they provide delegates with additional time to exchange their views on contentious and unresolved issues in the draft treaty text. Based on our observations of the Intergovernmental Conferences in 2019, we can confidently say that marine biodiversity research accounts for a critical conflict line between developed and developing countries. In the following, we will further develop this argument and introduce some findings and recommendations from our new paper “The Usual Suspects? Distribution of collaboration capital in marine biodiversity” recently published in Marine Policy.

The unequal global distribution of ocean science, together with the lack of sufficient scientific and technological capacities to explore and exploit marine biodiversity in the global South, are repeatedly referred to as crucial issues that the new BBNJ Treaty should address. Firstly, to account for the idea that the protection of BBNJ is a common concern of humankind and that developing countries should be empowered to contribute to conservation measures (e.g. identification, designation, management, and monitoring of MPAs, contribution to EIAs) by their means. Secondly, to reduce global inequalities in exploring and exploiting “global commons”, by transferring the capacities and technological tools to use marine biodiversity in the High Seas to those that have historically been excluded from doing so.

Not surprisingly, under UNCLOS Article 242, “States and competent international organizations shall promote international cooperation in marine scientific research for peaceful purposes.” Acknowledging “rapid advances being made in the field of marine science and technology,” UNCLOS “urges the industrialized countries to assist the developing countries in the preparation and implementation of their marine science, [and] technology” (UNCLOS 1992, Annex 6). Thus, while scientists and governments seem to agree that scientific cooperation is needed to reduce global imbalances in marine science, progress in defining and assessing “the special interests and needs of developing countries” (UNCLOS Preamble) has been slow.

It is against this background that MARIPOLDATA proposes looking at the BBNJ Treaty negotiations by combining ethnographic work at the negotiation site with bibliometric analyses of the marine biodiversity research field. The treaty negotiations – most notably concerning the package element “Capacity Building and Marine Technology Transfer” – demonstrate the need for careful analyses of the global distribution of ocean science and developing countries’ needs.

The article we recently published in Marine Policy is intended as a first step into an analysis of the Marine Biodiversity science field from a social science perspective. Since marine biodiversity has firmly established itself is a political dimension (e.g., Biodiversity Beyond National Jurisdiction (BBNJ) negotiations at the UN), it is in a relatively unique position in that it has the potential to matter and influence political decision making, thus making it a fascinating case study for political scientists. Our paper has introduced a new concept of “collaboration capital”, which is derived from a co-authorship network of countries engaged in the production of marine biodiversity scientific literature. This concept is inspired by Pierre Bourdieu’s notion of ‘capital’ and views international scientific collaboration as a finite resource that countries can allocate to each other within a given time-frame.

These dynamics leave the regions of the global South with an underdeveloped research network that may impact their positioning in the political arena, specifically, but not limited to, at the BBNJ negotiations. 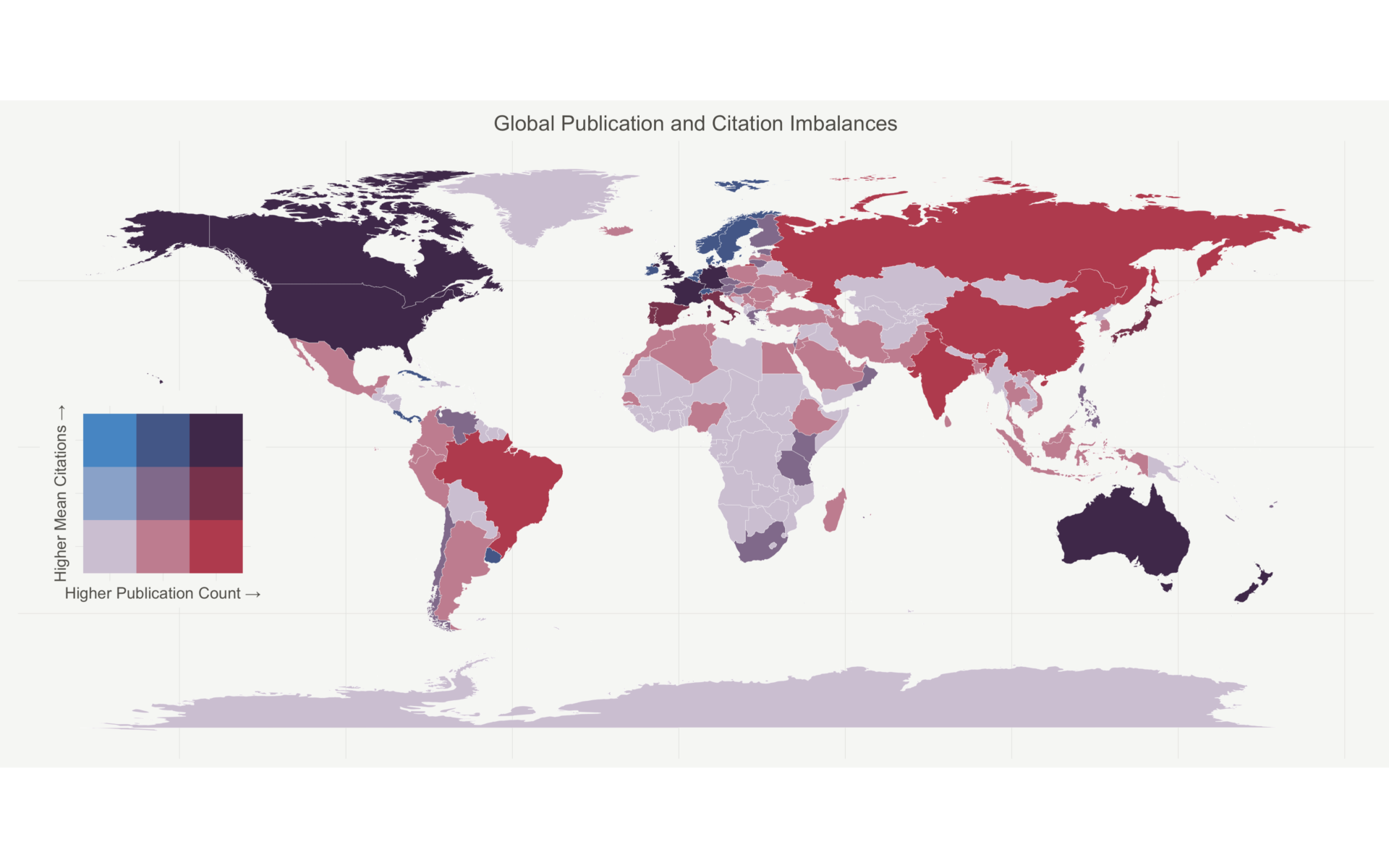 The current study has implications for scientists and practitioners invested in the protection of the marine environment and the design of institutional arrangements and activities to foster scientific collaboration between countries and regions. Particularly, efforts to institutionalize science advice and capacity building at the national, regional, or international scale should take the structural conditions and effects of international scientific collaboration into account. As was argued earlier, scientific cooperation is key for supporting the development and implementation of marine conservation in and beyond national jurisdiction, yet, our data reveals substantial differences between cooperation patterns of developing and developed regions that may potentially hinder regional research networks.

Addressing these differences as part of the negotiations around a new legally binding instrument to protect marine biodiversity in areas beyond national jurisdiction is important because the treaty may have direct ramifications for the practice of ocean science, including potential restriction for marine scientific research to account for global inequalities between the Global North and the global South. Access to marine biodiversity, more specifically to marine genetic resources (MGRs), is a high-stakes item for current negotiations; it involves complex scientific endeavours in which considerable investments, often government-funded, are made. Demands by countries of the global South for equal access to MGRs and the fair distribution of benefits resulting from their use are inherently tied to the unequal scientific capacities to explore and exploit those.

Capacity building and marine technology transfer (CBMTT) is another point of contention within current negotiations, for the demands of developing countries exceed what developed countries are willing to concede. CBMTT and scientific cooperation between governments of the global North and global South may have the potential to reduce some of the inequalities resulting from the resource and equipment-intensive character of marine scientific research. CBMTT in the new treaty should give primacy to the regional scale, for instance, by recommending that bilateral CBMTT arrangements should include research institutions or individual scientists from neighbouring countries.

What does it mean for future research?

Future studies may, for instance, look into how different regions contribute to specific topics or sub-disciplines, whether authors engage in ’strategic’ collaboration to shape their position or strategically use their collaboration capital, e.g., to gain access to marine environments, genetic resources, or other data. The results should be of interest to a broad spectrum of readers, including marine scientists, policy-makers, conservationists, and social scientists interested in science-policy interrelations. They may entice more in-depth investigations into the causes of structural imbalances in marine biodiversity research and anticipate critical, innovative thinking on how to overcome them in the future.

Past MARIPOLDATA blogs about the BBNJ negotiations:

Slow progress in the third BBNJ meeting: Negotiations are moving – but sideways, by Ina Tessnow-von Wysocki on September 6, 2019

Setting the stage for the common heritage of humankind principle: Diving into further negotiations on a new marine biodiversity treaty, by Alice Vadrot, Ina Tessnow-von Wysocki and Arne Langlet on August 28, 2019

Impressions from the second week of BBNJ negotiations and why they became political in the end, by Alice Vadrot and Arne Langlet on April 15, 2019